Changing Young Lives through HISTORY and the experiences of others.

AMERICA'S GREATEST YOUTH PROGRAMS ...        READ BEFORE VIEWING...Our programs were developed and based upon nearly 50 years of research to address youthful reckless behavior and community  responsiblity.  These programs are adaptable in any community and avavilable to any drag racing facility.  Our material and methods, supported  by a level of research never before addressed, created two premier community policing youth programs that address street racing, dui, drug use, leadership, responsiblity, maturing, fatherhood and citizenship.  Our programs address the core root of youth behavior which threatens public safety.

HISTORY OF OUR PROGRAM DEVELOPMENT

The National Drag School Youth Projects Inc., is an IRS approved 501(c)3 organization of volunteers.  There are no paychecks in this community service organization. Most of our funding comes from the donations of families of World War II and Vietnam era veterans, and families that suffered a loss in a car crash.  Our community partners include STATE FARM INSURANCE, AUTO PLUS, PEP BOYS, VFW537, HANOVER TOYOTA, LB SMITH FORD.

The concept of creating a community policing interaction program was inspired from a February 29, 1972 espisode of ADAM-12 where the police interacted with youthful street racers.  Since that time we developed programs that address reckless youthful behavior, including, street racing, alcohol and drug use, anger issues, fatherhood and citizenship responsiblity, and other issues affecting young teenagers and young adults. In addition to creating two nationally promoted youth behavior programs, Drag School and Community Street to Strip, that same "teenager" is currently researching and writing the biographies of 101 boys from his former high school KIA in World War II, Korea and Vietnam.  Their stories are inspiring and will be read and studied by future young participants in our youth programs.  Those positive and inspiring programs are further described on this website.

No. 1 killer of youth

In 2017 33 soldiers were killed in the Iraq War.  In 2017, 3255 teens ages 15-19 were killed in America's auto crashes.  It is the No. 1 killer of teens and young adults whether by reckless behavior or inexperience.  Those numbers do not reflect the innocent loss of life that their crashes may have caused.

The Drag School Program is our primary program.  It is a 2 week rehabilitation and "Youth Trauma" program designed to address the mind set of reckless behavior, and the resulting trauma a teen will face when a fatality is involved.  It is the only program of its kind in America.  Our success rate is noted by our former students testimony who willingly return each year to speak to future classes.  Our Drag School Program would not be possible without the cooperation and support of the York County DA office, probation services and area police commands, and our benefactors. 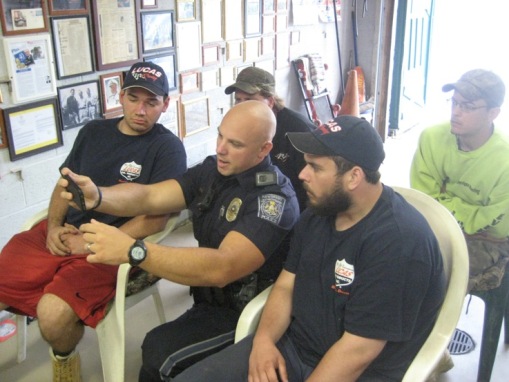 The Drag School Program was born out of nearly 50 years of interviews, experiences and global-wide research into the world of youth.  Some of those youths were the WORLD WAR II teenagers that jumped into Normandy, or landed on Iwo Jima.  It was they who inspired this incredible program with no equal.

NOTE: While the Drag School program can be replicated in any community, the Community Street to Strip program needs a local drag strip to operate.  We urge community leaders to inquire and support their local dragway.  It is a positive and appealing resource to interact with the greatest number of America's youth.   Thank you Welcome to the first and only youth programs in America that use the experiences of combat and other life-changing situations to address reckless behavior and youth trauma.  Nearly 50 years of research, interviews and development  have inspired American's Greatest Youth Programs.  This website will identify our two primary youth programs;

"The approach you have taken to addressing the carnage and dangers of street racing and other reckless youth behaviors, is actually a model for how a variety of other solutions regarding issues facing young adults in this country could be fashioned."

Stephen Reed, 2005, 24 year mayor of the capitol city of Pennsylvania and historian 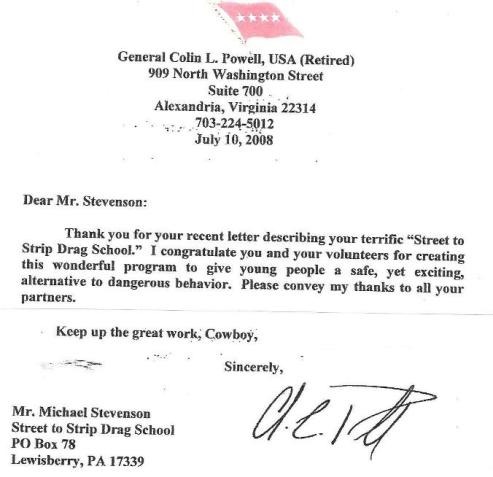 Simply said, to value and respect life...  the Drag School Program is the best "youth trauma" program anywhere by the accounts of those ordered to participate in the two  week program.  What we have developed and put to the test would not be possible without the cooperation of the York County District Attorney's Office.  While our  Drag School program design addresses many issues affecting young people, it is a particularly  positive program for young lives whose crash caused a fatality. Throughout the nightly classes of viewing and reading material, tests, discussing and sharing experiences, such moments are enhanced when guest visitors make an appearance.

These visitors include combat survivors and victims of a multitude of life's situations;  including auto crashes, gangs, incarceration, bank robbery, handicaps, cancer, and family loss.  These visitors come from all over America and make their appearance for the benefit of six (6) young males.

SAMPLES OF OUR CLASS TIME STORIES... Wy Butterfield was a 19-year old teenager that became a man and found that his horrific experiences in World War II when he was one of ten to survive the sinking of USS JUNEAU gave him pause to "appreciate life."

USING THE EXPERIENCES OF OTHERS TO ENLIGHTEN AND MATURE World War II and other combat situations provide us many examples of teenagers that survived horrific circumstances, and came to have a greater respect and appreciation for life.  William Lloyd of Ohio was another.

William Lloyd was only 17 years old when he signed aboard USS FRANKLIN to be counted among the brave boys to defend America.  He had never seen the ocean until then, but he knew it was the right thing to do.

While USS FRANKLIN was off the coast of Japan in the far Pacific it was assaulted by an enemy plane.  The assault left the ship an exploding and blazing inferno.  Lloyd and many other young boys were trapped below for hours as the ship raged with fire and exploding ammunition.  Many died.   Young William Lloyd survived, matured and found a deep apreciation for life and family through his experience. OUR STUDENTS LEARN THAT WHAT THEY THOUGHT WAS A "BAD DAY" FOR THEM WHEN THEY GOT CAUGHT IN A DUI... WAS  REALLY A PROBLEM OF THEIR OWN DOING.

On a sunny day in November 2008, 23 year-old Dallas Wiens of Fort Worth, Texas was working at his church painting the steeple when he hit a power line.  The contact should have killed him, but he survived.  However not without the complete annihilation of his facial features and he was rendered blind.  In 2011, Dallas underwent the first full face transplant in America.  His story is told in video and news accounts and provides the Drag School participants pause to reflect on their current situation in the judicial system... a problem they can correct.  Dallas Wiens' story is one of numerous stories the class will read, report and absorb.

All donations are tax-deductible and compensate no one.  We recognize all donations and you will receive a color copy of our popular annual newsletter, The SEARCHLIGHT every April.  Thank you

Our Community Street to Strip Program 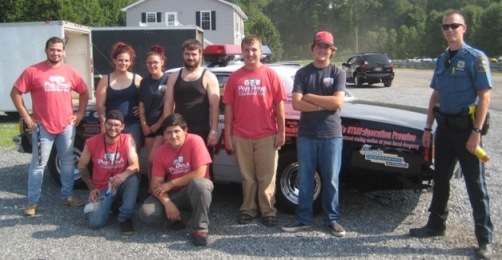 A young World War II combat veteran serving aboard USS NORTH CAROLINA who became a school teacher told us..."Find what interest most teenagers, and use that to educate and teach them positive things."

When we recognized auto crashes as the No. 1 killer of youths, we also noticed how many were dying from impromptu speed thrills and other  typical "invincible" youthful thinking on public roadways.   Research reveals that the greatest number of youths often play with speed, while others never think anything bad will happen to them because they are "good drivers."   That thinking is a roadway to disaster.

Then we found the right medium and best approach to present an opportunity to communicate and enlighten at risk youth [which is all youths]; the drag strip.

No matter how hard we try, we will never save every youth from recklessness, but if we don't try then we are part of the problem. 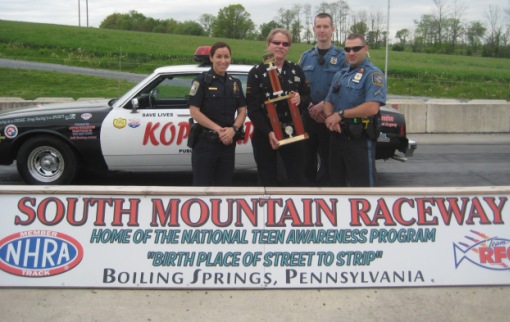 Teenage deaths from auto crashes are on the rise again.  In 2013 nearly 2200 teens, ages 16-19 were killed.  In 2017 the number reached 3255.  Every day 10 teenage drivers are killed.  Too many parents and grandparents are not concerned because they beleive it will not happen in their family. They are wrong.

Most folks also believe that the death rate is due to distracted driving (ie cell phone use).  However, the truth is that before cell phones were invented, auto crashes were already the No.1 killer of ages 16-24.  It remains so.

In the month of January 2015, dozens of teenagers were killed in auto crashes involving reckless conduct, alcohol, and inexperience.  Among them were a brother and sister in Wilmington, California that were killed only 15 minutes after the school bell dismissed them.  It was a moment of invincible thinking during a street racing challenge. 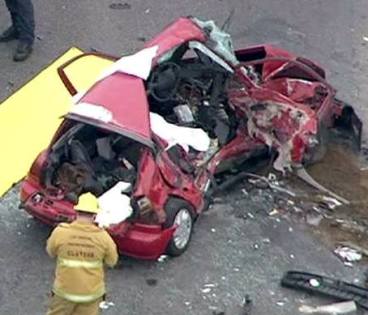 The best defense against teenage reckless thinking is interaction programs that involve police and an educational method that encourages them to participate.  That is Community Street to Strip.

If you wish to help in our national mission... PLEASE SUPPORT AND ENCOURAGE YOUR LOCAL DRAG STRIP TO IMPLEMENT OUR Community Street to Strip Program.

If you wish to become a benefactor, please make your checks payable to: